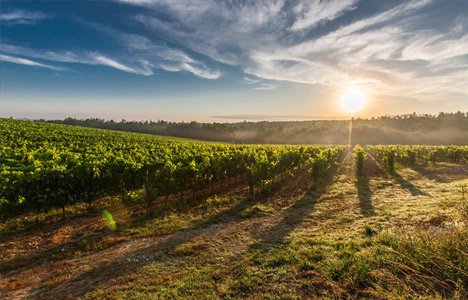 Burgundy wine (French: Bourgogne or vin de Bourgogne) is made in the Burgundy region of eastern France, in the valleys and slopes west of the Saône, a tributary of the Rhône. The most famous wines produced here—those commonly referred to as "Burgundies"—are dry red wines made from pinot noir grapes and white wines made from chardonnay grapes.

Red and white wines are also made from other grape varieties, such as gamay and aligoté, respectively. Small amounts of rosé and sparkling wines are also produced in the region. Chardonnay-dominated Chablis and gamay-dominated Beaujolais are formally part of the Burgundy wine region, but wines from those subregions are usually referred to by their own names rather than as "Burgundy wines".

Burgundy has a higher number of appellations d'origine contrôlée (AOCs) than any other French region, and is often seen as the most terroir-conscious of the French wine regions. The various Burgundy AOCs are classified from carefully delineated grand cru vineyards down to more non-specific regional appellations. The practice of delineating vineyards by their terroir in Burgundy goes back to medieval times, when various monasteries played a key role in developing the Burgundy wine industry.

The Burgundy region runs from Auxerre in the north to Mâcon in the south, or to Lyon if the Beaujolais area is included as part of Burgundy. Chablis, a white wine made from Chardonnay grapes, is produced in the area around Auxerre. Other smaller appellations near Chablis include Irancy, which produces red wines and Saint-Bris, which produces white wines from Sauvignon blanc.

There are 100 Appellations in Burgundy and these are classified into four quality categories. These are Bourgogne, village, premier cru and grand cru. Eighty-five miles southeast of Chablis is the Côte d'Or, where Burgundy's most famous and most expensive wines originate, and where all Grand Cru vineyards of Burgundy (except for chablis grand cru) are situated. The Côte d'Or itself is split into two parts: the Côte de Nuits which starts just south of Dijon and runs till Corgoloin, a few kilometers south of the town of Nuits-Saint-Georges, and the Côte de Beaune which starts at Ladoix and ends at Dezize-les-Maranges. The wine-growing part of this area in the heart of Burgundy is just 40 kilometres (25 mi) long, and in most places less than 2 kilometres (1.2 mi) wide. The area is made up of tiny villages surrounded by a combination of flat and sloped vineyards on the eastern side of a hilly region, providing some rain and weather shelter from the prevailing westerly winds. The best wines - from grand cru vineyards - of this region are usually grown from the middle and higher part of the slopes, where the vineyards have the most exposure to sunshine and the best drainage, while the premier cru come from a little less favourably exposed slopes. The relatively ordinary "village" wines are produced from the flat territory nearer the villages. The Côte de Nuits contains 24 out of the 25 red grand cru appellations in Burgundy, while all but one of the region's white Grand Cru wines are in the Côte de Beaune (the exception being Musigny blanc). This is explained by the presence of different soils, which favour pinot noir and chardonnay, respectively.

Further south is the Côte Chalonnaise, where again a mix of mostly red and white wines are produced, although the appellations found here such as Mercurey, Rully and Givry are less well-known than their counterparts in the Côte d'Or.

Below the Côte Chalonnaise is the Mâconnais region, known for producing large quantities of easy-drinking and more affordable white wine. Further south again is the Beaujolais region, famous for fruity red wines made from Gamay grapes.

Burgundy experiences a continental climate characterized by cold winters and hot summers. The weather is very unpredictable, with rains, hail, and frost all possible around harvest time. Because of this climate, vintages from Burgundy vary considerably.

Burgundy is in some ways the most terroir-oriented region in France; immense attention is paid to the area of origin, and in which of the region's 400 types of soil a wine's grapes are grown. As opposed to Bordeaux, where classifications are producer-driven and awarded to individual chateaux, Burgundy classifications are geographically-focused. A specific vineyard or region will bear a given classification, regardless of the wine's producer. This focus is reflected on the wine's labels, where appellations are most prominent and producers' names often appear at the bottom in much smaller text.

The main levels in the Burgundy classifications, in descending order of quality, are: Grand crus, Premier crus, village appellations, and finally regional appellations:

Grand Cru wines are produced by a small number of the best vineyard sites in the Côte d'Or region, as strictly defined by the AOC laws. These Cru wines make up 2% of the production at 35 hl/ha, and are generally produced in a style meant for cellaring, and typically need to be aged a minimum of five to seven years. The best examples can be kept for more than 15 years. Grand Cru wines will only list the name of the vineyard as the appellation - such as Corton or Montrachet - on the wine label, plus the Grand Cru term, but not the village name.

Village appellation wines are produced from a blend of wines from supposedly lesser vineyard sites within the boundaries of one of 42 villages, or from one individual but unclassified vineyard. Wines from each different village are considered to have their own specific qualities and characteristics, and not all Burgundy communes have a village appellation. Village wines make up 36% of production at 50 hl/ha. These wines can be consumed two to four years after the release date, although again some examples will keep for longer. Village wines will show the village name on the wine label, such as "Pommard", and sometimes - if applicable - the name of the single vineyard or climat where it was sourced. Several villages in Burgundy have appended the names of their Grand Cru vineyards to the original village name - hence village names such as "Puligny-Montrachet" and "Aloxe-Corton".

Regional appellation wines are wines which are allowed to be produced over the entire region, or over an area significantly larger than that of an individual village. At the village, Premier Cru and Grand Cru levels, only red and white wines are found, but some of the regional appellations also allow the production of rosé and sparkling wines, as well as wines dominated by grape varieties other than Pinot noir or Chardonnay. These appellations can be divided into three groups:

AOC Bourgogne, the standard or "generic" appellation for red or white wines made anywhere throughout the region, and represent simpler wines which are still similar to the village. These wines may be produced at 55 hl/ha. These wines are typically intended for immediate consumption, within three years after the vintage date.

Wines of specific styles or other grape varieties include white Bourgogne Aligoté (which is primarily made with the Aligoté grape), red Bourgogne Passe-Tout-Grains (which can contain up to two-thirds Gamay) and sparkling Crémant de Bourgogne.

Chablis wines are labelled using a similar hierarchy of Grand Cru, Premier Cru, and Village wines, plus Petit Chablis as a level below Village Chablis. Wines from Beaujolais are treated still differently.

In general, producers are always allowed to declassify their wine in steps to a lower-ranked AOC if they wish to do so. Thus, a wine from a Grand Cru vineyard may be sold as a Premier Cru from that vineyard's village, a Premier Cru wine may be sold as a Village wine, and so on. This practice will almost invariably mean the declassified wine will have to be sold at a lower price, so this is only practiced when something is to be gained overall in the process. One motive may be to only include vines of a certain age in a Grand Cru wine, to improve its quality and raise its prestige and price, in which case the wine coming from younger vines may be sold as a Premier Cru at a lower price. Overall, such a practice may allow a producer to keep a higher average price for the wine sold.

In total, around 150 separate AOCs are used in Burgundy, including those of Chablis and Beaujolais.[14] While an impressive number, it does not include the several hundred named vineyards (lieux-dits) at the Village and Premier Cru level, which may be displayed on the label, since at these levels, only one set of appellation rules is available per village. The total number of vineyard-differentiated AOCs that may be displayed is well in excess of 500.